Welcome to the BASEMENT of BLOODY HORROR!!

David “The Rock” Nelson makes monster movies. He makes the cheapest, most poorly acted and ineptly directed monster movies ever made, shooting them on videotape and editing them on an editing bay that consists of two VCRs, his camera, and a Radio Shack f/x box. If you run into him in a bar, chances are you may find yourself in one of his movies – he can’t afford to pay anyone, so whoever he can get in front of his camera becomes a star.

As for myself, I see Nelson as a true artist who challenges us to reassess our concepts of “good” and “bad”. His films are much like school plays, or car wrecks. They can’t be judged by performance alone, but rather for their innate (and inane) entertainment value. I once went to a party where the host started telling everyone about this incredibly horrible movie he bought. He put it in the VCR and everyone started watching Nelson’s Vampire Woman. Though everyone agreed that the film was indeed awful, two hours later the shocked and appalled audience was still there. Many were even tempted to stick around for part two!

When Nelson is a guest on on radio or television talk shows, he could be accused of being a horrible guest – he’s easily distracted, won’t stay on topic, interrupts the host, upsets the furniture – howev 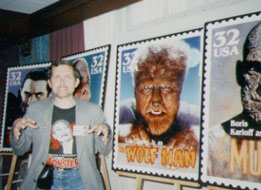 er, he always wins over the audience and they can’t get enough of him.

With this special section of the site, we hope to spread the word about Rocky’s unique and bizarre backyard masterpieces and share his horrifying talent with psychotronic fans everywhere. We’ll be adding more reviews and features (maybe even an interview with “The Rock” himself if we can keep him shackled long enough), so check back often.