Conrad Brooks vs. the Werewolf

Back in the summer of 1993, David “the Rock” Nelson met Conrad Brooks at a horror convention. Brooks (born Conrad Biedrzycki) was there to promote his career based on his association with the (then) upcoming Ed Wood movie. Rocky was there to pass out flyers, sell some tapes and enjoy his newfound status as “Ed Wood of the ’90s”. The two hit it off and somehow Nelson convinced Brooks to appear in his next camcorder monster movie.

It’s ironic, in a way. The way I remember it, Conrad started his acting career as the 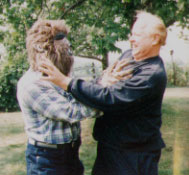 first “producer” to hire Ed Wood. Back in the late ’40s, Connie and his brothers Ted and Henry went west from their home town of Baltimore to visit Hollywood, where they met Wood. The brothers wanted Ed to shoot some home movies for them to show the folks back home. Ed leaped at the chance to ‘direct’, and soon had everyone acting out little cowboy skits for the camera. This eventually led to Wood’s short feature / TV pilot Crossroads Avenger. Brooks also held small parts in several Wood features.

The tape starts off with about 30 minutes of Rocky interviewing the Brooks brothers at the waterfront of the movie’s Baltimore location. The location shooting in Baltimore also ties Nelson’s career to John Waters, who always films in his own back yard. Not only are there several interviews covering the same material from different spots, but the tape also repeats the same interviews when interrupted by leaf blowers and what-not (no one edits like Nelson). This section is sort of dull and incoherent, and Wood fans have heard Brooks give the same interviews many times since – he’s still talking about his “new” feature, the Police Academy knock-off  Misfit Patrol, six years later. Even Wood fans may want to skip this part.

The 43 minute feature begins with a drunken Henry Brooks being attacked twice by the werewolf (Nelson in his wolfman mask) and killed. This might be called a mercy killing, allowing the elderly Henry to sit out the rest of filming on a hot day. Conrad vows revenge and somehow knows he can find the werewolf at the “old cemetery” (did I come in half way?). Ted Brooks meets him there, and they split up to hunt the beast down. Ted meets up with a mad caretaker (Nelson) who transforms into a werewolf and kills him, despite the fact Ted was armed with a baseball bat. Conrad repeats his lusty vows of revenge. The werewolf lopes around the graveyard endlessly, at one point attacking a statue.

No one ever explains why the werewolf is running around in broad daylight, although I suppose there’s no reason why he shouldn’t. After all, the full moon is often visible in the daytime.

Eventually, Conrad and the werewolf face off for their final battle. Conrad has no luck against the monster using a toy Uzi and a smelly t-shirt. I won’t tell you how he finally defeats his foe, but you can be assured it takes a long time and makes for one of the most unique and bizarre sequences I’ve ever seen in a film.

Nelson likes to fill up his tapes and this one is no exception. Rounding things out is a sequence of trailers for movies that were never made, followed by outtakes from

CBvsW. That’s right, even though Nelson often includes muffed takes in his films, he still has plenty of footage that doesn’t make it into the film, and he generously sees fit to share this footage – even though nobody wants to see it. The tape also has a lot of home video that Rocky shot with Brooks’ family during his stay in the Baltimore area.

Since then, Brooks has soured on his association with Nelson, claiming he directed much of the feature himself! He’s gone on to use his camcorder experience to make at least one trashy video feature of his own, Slaves of the Vampire Werewolf.

2 Responses to Conrad Brooks vs. the Werewolf