David “the Rock” Nelson is back with another full-length feature. Wait! Don’t be too alarmed – it’s not a 4-hour suckathon like Vampire Woman, just a normal 109 minutes. 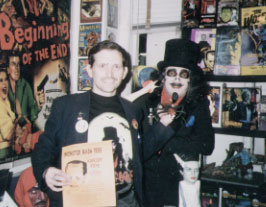 This epic has the largest cast ever for a Nelson movie – spreading the pain far beyond his usual troup of family and friends, and a surprising number of the actors are real celebrities. Among the cast threatened by the hymenopterous horror is legendary B-movie director Roger Corman (from It Conquered the World to Carnosaur and beyond), eerie editor and sci-fan #1 Forrest J Ackerman (Famous Monsters of Filmland magazine), actor and master of make-up mayhem Tom Savini (From Dusk Till Dawn), renowned ghost hunter Richard Crowe, and schlockmeister emeritus Fred Olen Ray (Hollywood Chainsaw Hookers). Night of the Living Dead collaborators John Russo, Karl Hardman and Bill Hinzman face the perilous pismire, along with TV horror movie hosts Svengoolie and Son of Ghoul. Former Nelson victim Conrad Brooks gets killed by the Ant from Hell, then makes a later appearance. Hey, wait! Even I‘m in it, along with Fearless Leader Flores! How did that happen? Just goes to show that if you get anywhere near Nelson, you’re likely to show up in one of his notorious monster movies.

Just ask Hillary Clinton. That’s right, just like nearly everyone in the above paragraph, the First Lady of the United States of America was unknowingly videotaped by Rocky and written into the script. She even has a close-up!

Even with a cast this huge, Nelson ends up taking over half a dozen roles himself. The first is the frightful Rock Ogre, who appears in his old house of monsters in the graveyard to introduce the story and narrate. The story starts when mad Dr. Nelson gets drunk and entrusts the disposal of dangerous toxic waste (in a coffee can labeled “dangerous toxic waste” with a magic marker) to his feeble-minded assistant Ivan Nelson. He spills the goo into the north branch of the Chicago River, where it instantly mutates a hapless insect into the title beastie.

It crawls! It growls! It hunts hu-man victims! It’s apparently attracted to alcohol – as the first victims to fall to its ferocious appetite are some very drunk partyers, mainly members of the local garage rock band Matter (who also provide most of the film’s better-than-average soundtrack). After that, it’s just one dang victim after another.

Detective Nelson is called in on the case, and investigates in his usual manner – by gruffly answering phone calls, peeking at dead bodies, and stuffing his face with greasy food. Some of the victims are also played by Nelson – an endless string of “twin brothers”, doubtless sired by different fathers and/or mothers simultaneously. Don’t ask me what became of Det. Rock, after he left for Cleveland he’s never seen again. Maybe the Ant got him, too.

Over the past few years, everywhere Nelson and his video camera went, so did the Devil Ant, ever ready to nab a few more victims for this frightfest in the making. Not content to decimate Nelson’s usual haunting grounds of Park Forest and Chicagoland, the ants-in-the-pants filmmaker also went on location to Cleveland, Pittsburgh, Monroeville, and New York City to accost horror conventions and picnics with his special brand of moviemaking. Aiding his task of shoehorning footage into a story is his new skill at dubbing – if an “actor” mentions the wrong monster, Rock simply dubs “Devil Ant” over the offending phrase to tidy up.

Another annoying technical achievement is Nelson’s frequent use of some kind of solarizing video effect – not just as an effect during fright scenes, but any old time. I put up with a lot from the Rock, but this is just as aggravating as the many scenes of himself eating and should be abandoned, or at least pared back.

Before he runs out of tape an amazing body count of 57 victims fall afoul of the fangs of the fearsome formicidae. Maybe there’s something wrong with me, but I find it endlessly amusing to see one person after another “attacked” by an oversize rubber ant. It’s kind of like Candid Camera – every reaction is different. Or the same. But anyway, I got a kick out of it.

The tape is filled out with interviews with some of Rocky’s unwitting ‘cast’ as they try to be polite to him and generally succeed. There’s also some drive-in intermission ads, interspersed with Rocky’s own gross parody of same (werewolf milk! ick!), and a trailer for a future Nelson epic: Miss Werewolf. He sure has a knack for coming up with great titles that no one else would use!