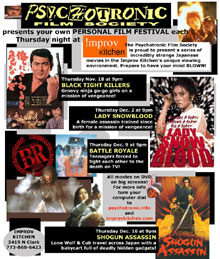 YOU can START YOU OWN
PSYCHOTRONIC FILM SOCIETY
in YOUR OWN HOME TOWN!!
Here’s HOW:

Once Psychotronic Film Society meetings were held in dank cellars, seedy drive-ins, disgusting urban grindhouses, and musty attics. Members were always fearful that at any moment a squad of Gestapo storm troopers would descend on the meeting, arresting the ringleaders and confiscating copies of I Spit on your Corpse, The Body Beneath and Robot Monster. Today, everyone has a phone/computer in their pocket and “psychotronic” is a household word. You can find most of Ed Wood’s movies at your local video store or download them on the internet – and no one even looks at you funny when you rent one. Heck, it’s been months since anybody in the PFS has been thrown in jail. 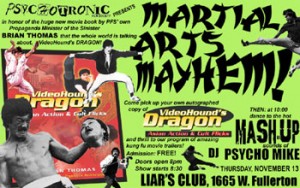 There are sects of the PFS in Washington, DC, Seattle, Cincinnati and even Australia. Every now and then we’re asked, “How can I start up a sect of the Psychotronic Film Society in MY home town?”

It’s simple really. Here’s the rough rules of starting your own sect of the PFS: 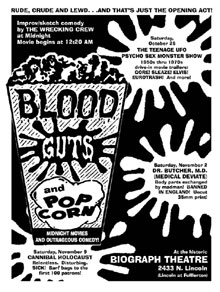 How do you start? We started by getting together in members’ homes once a week or so to watch psychotronic movies on video. When that got too big and complex, we started having meetings in public places and inviting the public to come, too. It’s as simple as finding a good bar that has a decent video system to agree to let you show movies.

We have a sect on an island in Australia that goes 50 miles to rent 16mm films once a month and then screens them on a sheet in a church. Very small town. As you might guess, this is a loose organization.

We’ve had big shows in night clubs that have drawn thousands, a screening series in a movie theater inside an opera house, parties with celebrities, and bar shows that have drawn two locals that would’ve been there anyway. They’ve all been fun.

You can also set up all-ages shows in all-ages places. For example, you could show a movie like Terror from the Year 5000 or Gorgo in a school basement even – though we prefer to drink at meetings. You can’t expect people to watch Double Agent 73 sober.

Don’t charge admission unless you’re sure what you’re showing is public domain. Or unless you’ve made some deal with the rights holder, as we’ve done in the past.  For example, we had screenings with Russ Meyer making public appearances . 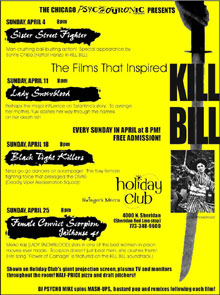 Make a list of local media outlets, especially the free weeklies, and send them notice in plenty of time so you get in their film listings. If your venue runs ads, try to get them to mention your psychotronic night in the ad. Make cards or flyers to put up around town – y’know, comics and record stores and such – and leave plenty around the venue where the show is.

Don’t expect to make any money. Seriously, we’ve found that the less money involved in the PFS, the better things go. Mike Weldon, who we flew into town for some of our early shows, has tried to claim trademark on the word psychotronic – despite the fact he didn’t invent it – and all this has done is alienate folks who would otherwise be promoting his store, magazine and books. Psychotronic, like the internet, should remain free. If you figure a way to make money off of either, let us know.

Don’t stress. This is for fun. We’ve gotten the runaround from a local movie theater that wanted us to host screenings and midnight shows for nearly a year. Do we get uptight? Nope – it’s not costing anything, and we can still show movies and write about them and have a good time.

Set up a website so you have a place to post info, rant, and we can swap links. We’ll even give you a banner so you look like you have advertising (e-bizness!).

And keep in touch!

2 Responses to How to PFS