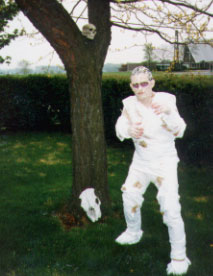 David “the Rock” Nelson knows what he likes: monster movies! And he likes his own monster movies more than any other. Heck, even the many characters he plays himself are fans of his movies. Here’s another collection of Nelson’s oddball no-budget hi-energy mess-terpieces. After some footage of Rocky boxing and other “behind the scenes” tidbits, we get to:

In the title epic, Nelson plays a mad suburbanite who thinks he’s an Egyptian high priest. This nut – twin brother of Detective Rock Nelson (Nelson) – has a real mummy sequestered in his backyard tomb/garage, and raises it from the dead to get
revenge his enemies and “show the world that you are here!” The mummy (Nelson) attacks the House of Nelson and many relatives and neighborhood acquaintances are killed. Det. Nelson is called in. He enlists the help of Andrew “Chief” Moritz and Janet-Lynne Okulanis, and together they battle the mummy with toy pistols, swords, ping-pong ball guns, smoke bombs, and pepper spray. Ramses himself would be pleased.   20m.

SON OF WEREWOLF
Opening with an extended flashback prologue forward, a woman is attacked in her home and somehow chastely raped with her clothes on by a pesky werewolf. Her husband kills the werewolf with a baseball bat, but he’s too late. Thirty years later, Janet is stalked through a genuinely atmospheric ghost town by the werewolf’s son (Nelson). He carries her off to an old fieldhouse. There the beast is accosted by his half-brother Jerry (Jerry Dio), who announces his intention to shoot the werewolf with his “siwver buwwets”.    11m.

Also included are several episodes in “The Adventures of Janet” series, in which Nelson’s favorite leading lady (and quite possibly the worst actress in history) has her sunny afternoon interrupted by some rampaging monster. Plus: trailers for other Rocky Nelson pictures.

This is a lively tape with lots of laughs and weirdness, clips of which have been shown on many television programs, dumbfounding the unsuspecting hosts.