Shot back in 1991, this collection of shorts were among the first made by Nelson, inspired by his attendance of Psychotronic Film Society shows, which reawakened his love of monster movies. In true Rocky fashion, Nelson begins this retrospective tape by appearing onscreen in his old marine uniform to introduce the program and show off his boxing trophies, followed by a brief clip of some punching bag work.

DRACULA VS. SODOM INSANE
Even monsters want to kill the wacky Iraqi! Sodom Insane (Mike Johnson) sneaks up on the Frankenstein Monster (Mike Johnson) and throws rocks at him. Dracula (David Nelson) teams up with Frankenstein to track the Iraqi tyrant to his Park Ridge neighborhood hide-out (the familiar Nelson garage) and get revenge. Sodom tries to kill Dracula with a variety of toy weapons, but finds the toy bullets have no effect. Foiled, Sodom reads a book called “How to Kill Vampires” to prepare for a rematch. 25m.

FRANKENSTEIN VS. SODOM INSANE
The monsters come to the aid of President George Bush again in this sequel. Sodom (Nelson) sics his pet rubber snake on Frankenstein, but the monster “kills” it. He then tries a variety of weapons on his foe, to no effect. Consulting a book entitled “How to Kill Frankenstein’s Monster(s)” doesn’t help much either. It’s a shame the U.N. inspections couldn’t expose Sodom’s arsenal of rubber knives and cap pistols. As a last resort, he studies up on his boxing skills (learned in the Baghdad Golden Gloves). Brother Phillip Nelson makes a cameo as a guy afraid of the monster. 19m. 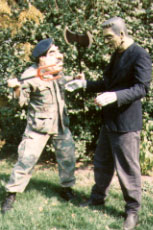 off, and the grotesque president decapitates his enemy with an uppercut. 4m.

THE MAD DR. MEETS SODOM INSANE
A mad scientist flies in from Iraq to sew Sodom’s head back on and re-animate his corpse, just so he “can get killed again” by the Werewolf. Lacking gratitude, Sodom kills the doc with a toy uzi and a “99 cent Magnum clicker gun”. The end? 14m.

THE ROCK VS. SODOM INSANE
With David “The Rock” Nelson stepping out from behind the makeup to star as himself, Johnny Heard here plays the new Insane. In a sparring match, Rock knocks Sodom’s head all the way back to Iraq! 6m.

As I’ve said before, taste for Nelson’s monster movies is best acquired in short doses, like an STD. These early shorts are more like pro wrestling than monster movies – the taunting and boasting takes up as much time as the fighting, and is equally exciting. After over a decade of making these backyard epics, has Nelson improved any in the area of acting, directing, producing, camerawork or editing? Watch these early films, O Viewer, and decide for yourself.