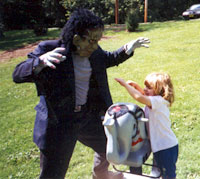 When we last left David “The Rock” Nelson, he was throwing a rubber insect at unwilling participants and videotaping the results (see Devil Ant). This time, Nelson revisits his old fiend the Frankenstein Monster, who starred in his early film Frankenstein Meets Saddam Insane.

Let me get my impressions down while they’re still rotten in my mind. While not what I would call “rich” in plot, Frankenstein Stalks looks like The Usual Suspects next to Devil Ant. Dr. Frank (Nelson), yet another identical Nelson cousin, with the help of his hunchback assistant Carl Krenshaw (Nelson), raises a TV antenna above his basement lab to absorb enough cosmic rays to revive the Monster (Nelson in a floppy rubber Frankenstein mask). Of course, the Monster breaks loose almost immediately and goes on a backyard rampage, startling wildlife and killing several people. Detective Rock (Nelson) is once again called on to investigate the “spook” scene. As usual, instead of doing any police work, Detective Rock spends all his time eating, sleeping, watching monster movies, and eating. Occasionally he’s interrupted by a pretend phone call, upon which he refuses to admit that his family is involved in monster making. He also drops in several plugs for the Monster Bash convention.

Keeping up the family tradition, Dr. Frank also spends all his time eating, watching monster movies, plugging Monster Bash, etc., instead of hunting down his lost Monster. He boasts that he will create his own race of atomic supermen – tomorrow. Meanwhile, the Monster tromps about the tri-state area, killing and annoying innocent victims.

Taking his label “Ed Wood of the 21st Century” to heart, Nelson gets even deeper into Woodism than ever before. Just like Wood, in some scenes he appears in drag as “Rockelle”, the Monster’s “ghoulfriend”. Just like Wood, he uses footage of the deceased – in this case his own brother – as part of the film. And just like Wood, he takes scenes from his other movies and cuts them into his new project, even if it makes no sense whatsoever.

And let’s not forget the Nelson innovations. Long before Tom Green, The Rock was humiliating his parents on videotape. Here he catches them napping again. Also, Frankenstein Stalks may be the first feature ever to show the Frankenstein Monster taking a bathroom break. Take that, James Whale!

But take heed: Nelson continues to develop his own distinct style. He’s taken note of what amuses his audiences at screenings and does his best to deliver more of the same. Unlike his early films, today it’s clear that David “The Rock” Nelson is in on the joke, and fully intends to have the last laugh on his critics.