The release of this 17-disc retrospective box set, especially arriving the month following the pioneering filmmaker’s death, brings on insistent waves of nostalgia. It may seem odd to apply the word “nostalgia” to material that includes scenes of bloody dismemberment and mutilation, but there it is all the same.

H.G. Lewis – for the edification of those out the know – is credited as the inventor of the gore film. In the early 1960s, Lewis and his partner Dave Friedman decided to branch out from their Chicago commercial film studio to make low budget features. Unable to compete with the well-funded Hollywood studios, Lewis and Friedman aimed to feed audiences entertainment they couldn’t get from Paramount and MGM, but after debuting a couple of “nudie” pictures they found the market already saturated. They got the idea that if they couldn’t stand out by peddling flesh, then they’d give the public blood, and plenty of it!

Poorly acted and photographed, their first effort Blood Feast nevertheless delivered to crowds at grindhouses and drive-ins something they’d never seen before: hardcore gore in blazing color. The expected backlash came swiftly, but mostly due to Friedman’s skills as a shrewd carnival veteran, the partners were able to dodge local authorities to make a financial killing. Striking while the butcher knife was hot, they quickly put a follow-up feature into production, and both men went on to become legends of exploitation filmmaking. 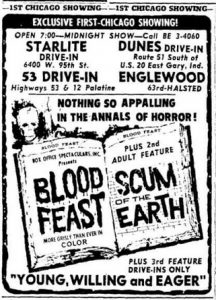 Growing up in the ’60s, I could only absorb Lewis’ adults-only cinema carnage by osmosis, catching garish newspaper and radio ads, mentions in monster magazines and whispered rumors from friends with older brothers who’d snuck in to see a movie where a guy gets his head cut off. By the time was old enough to see these films myself they’d become nearly impossible to see. By the mid-1970s, Lewis had retired from making movies, and home video was still years away.

In September of 1982, the 40th World Science Fiction Convention was held at the Hyatt Regency Chicago, boasting an attendance of more than 4,000 fans. Yep, 1982. Offering a mild thorn in the side to that stately event was the second World SubGenius Convention, just down the street at the much seedier Radisson (in the basement, I recall). Amid the preaching, head launching and devival antics by my fellow Church of the SubGenius pastors, I met Daniel Krogh. Dan, author of a book about Lewis and his films, had been a crew member and cameraman on Herschell’s last half dozen features, and he’d agreed to screen a couple of 16mm prints that he’d kept.

That night, a sort of pre-PFS meeting of like-minded weirdos sat on folding chairs and subjected themselves to Blood Feast, most of us for the first time. After intermission trips to the beer keg, Dan showed us Two Thousand Maniacs! and then Color Me Blood Red, completing the revered “Blood Trilogy.” 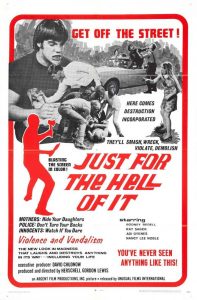 Dan asked if we wanted more. Then he threaded up The Gruesome Twosome. Most of the viewers wandered off at some point during that increasingly surreal night, but I hung on with Dan through She-Devils on Wheels, The Wizard of Gore, The Gore Gore Girls and even some shorts and half of Just for the Hell of It. Dan didn’t have the first half of the flick, but filled me in on the “plot” so I wouldn’t be too confused.

A lot more crazy stuff happened that psychotronic lost weekend, but a definite highlight for me was that Lewis marathon. Awash in a film world so extreme and shoddy that it takes on a sort of meta-realism, I was changed forever, and as the video boom hit in the following years I felt compelled to seek out every odd and obscure Lewis artifact that seekers unearthed. Foremost among those seekers was Mike Vraney of Something Weird Video, and much of the content on this set comes from the SWV releases.

This Arrow Video limited edition set includes seven Blu-ray discs containing Blood Feast, Scum of the Earth, Two Thousand Maniacs!, Moonshine Mountain, Color Me Blood Red, Something Weird, The Gruesome Twosome, A Taste of Blood, She-Devils on Wheels, Just for the Hell of It, How to Make a Doll, The Wizard of Gore, The Gore Gore Girls and This Stuff ll Kill Ya! If you don’t have a Blu-ray player handy, the films are also presented on seven DVDs.

Also included are two bonus BDs with five of the films presented in the original 1.33:1 ratio, a DVD of a HG Lewis feature documentary, an activity book, commentraks, featurettes, trailers, etc., all in packaging that looks like a Lewis cereal box!

While not absolutely comprehensive (there are other Lewis films out there), this is the largest collection of Lewis flicks available. Go ahead – have your own marathon, if you dare!

Read our own vintage PFS interview with Herschell Gordon Lewis