As they relate on the commentary track, one night Chicago filmmaking partners Herschell Gordon Lewis and Dave Friedman sat in their Wacker Drive office brainstorming. They’d spent the past few winters down 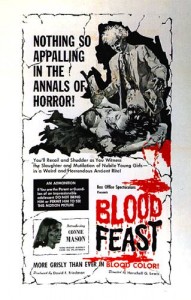 in Florida shooting nudie cutie flicks like Daughter of the Sun, Living Venus and Goldilocks and the Three Nudes. However, the naked lady feature craze had about run its course, and they found themselves with a full feature’s worth of color 35mm film and a desperate need for an idea. Since Lewis and Friedman couldn’t afford to compete with the major (and even the minor) studios, they needed to come up with something the others couldn’t (or wouldn’t) do. The answer came in a flash of inspiration: GORE.

There had been gory scenes in movies before – Hammer’s horrors for example – but never before had gore been the main point and attraction of the feature. And so they concocted Blood Feast, the tale of blood cult priest Fuad Ramses (Mal Arnold), working as a Florida caterer, while in his spare time killing and mutilating nubile females in order to procure ingredients for the title event.

The sturdy police detective played by Bill Kerwin (credited here as “Thomas Wood”) doesn’t so much track down the killer as fall over him. Since the murders look like they might be blood cult related, he takes in a lecture in Egyptology to learn more about them. There he meets young debutante Connie Mason (a popular Playboy centerfold at the time) who is also interested in Egyptian blood feasts, and he hits her up for a date. Meanwhile, Connie’s mother (Lyn Bolton) makes plans to indulge her daughter’s interests by providing a real Egyptian feast for Connie’s birthday party.

Well, since Ramses is the foremost Egyptian caterer in town, it’s not long before he’s plotting to make Connie the main course in a party of his own. Of course, Kerwin is there – if not to save the day, at least to interfere. Ramses takes it on the lam, climaxing in one of the most ridiculous chase scenes in movie history. Reportedly, there were some bookings for which the final reel was mistakenly replaced with a copy of reel six, and there were no complaints.

Budgeted at under $25,000, with acting that could be called “professional” at best (and was often something less), and make-up effects too garishly primitive to be believed by today’s audiences, Blood Feast was nonetheless outrageously successful, breaking box office records throughout the country. Lewis went on to direct a string of gore features, and no one caught up with him until after he’d already retired from directing in the 1970s. Even now, he’s willing to come out of retirement for more gore the minute the right offer comes along.

Years ago, Something Weird Video’s Mike Vraney started out trading tapes through the mail with other collectors across the country. From there he began to make his own transfers, hunting down odd and rare exploitation titles wherever he could find them. Today he’s the most under-appreciated film preservationist in the world, finding and making available hundreds of titles once thought lost. The fact that some of their films might be better off lost doesn’t deter him – Vraney’s attitude is “if we’ve got it, we’ll put it out there”.

A few years ago, Vraney began a partnership with Dave Friedman, releasing on video the treasures from Friedman’s vault. Though the Blood Trilogy that he made with Lewis (Blood Feast, Two Thousand Maniacs and Color Me Blood Red) had been out on tape before, Vraney saw to it that his transfer was the best that had ever been done. He even hunted down the outtake reels seen on these DVDs. Now that Something Weird has joined a legion of small labels making the leap to DVD, the Blood Trilogy was a natural choice for their first set of releases. They’ve done an excellent job. When it was released on a limited edition laserdisc, a vibrancy was revealed that had never been seen on the blurry videotape release. This DVD of Blood Feast is even better, with a sharpness and clarity it hasn’t had since it first entered Lewis’ camera. You can even read the title of the book the young woman is reading just before she has her leg chopped off. Even the trailer has never looked better. The only thing missing is subtitles (for the hearing impaired – and those who’ve had their ears cut off).

The commentrak has stories and details that Friedman and Lewis have never told before, with the added bonus of hearing the two old friends interact. The disc also includes the aforementioned outtakes (almost 50 minutes worth!), now accompanied by audio from Lewis’ films, and a gallery of exploitation film art. Perhaps most hilarious of all is the 20 minute short “Carving Magic,” in which Bill Kerwin teaches Harvey Korman how to cut meat. I wonder if he taught Fuad Ramses a thing or two.

One Response to Blood Feast DVD