A Chicagoan who changed the way film portrays violence is Herschell Gordon Lewis. 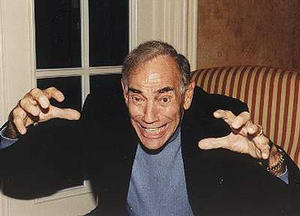 Yes, the Godfather of Gore is back!  His films — Two Thousand Maniacs, She-Devils on Wheels, The Wizard of Gore and so many more — changed horror films forever.  Mr. Lewis was in Chicago recently for an Internet marketing seminar, and I was able to meet him for drinks at his hotel and discuss the past, present and future of the man who created a new genre of film.

FLORES – To this day, I hear from Psychotronic fans about the book Dan Krogh and I 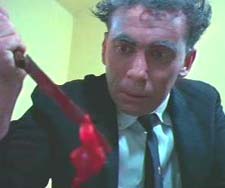 think Fantaco did on you years ago.  It had one printing, sold out and was never reprinted.  You actually are better known now than you were then.  I don’t understand why it hasn’t been re-done.  I’ve seen copies go for up to $100 on eBay.

LEWIS – Isn’t that something?  I don’t understand it.  People ask me about that book all the time.  It proves, Michael, that if you live long enough you become legitimate!

FLORES – I know marketing was crucial to your film work.

LEWIS – I certainly believe so, but I don’t think most fans understand that.  Making a movie actually takes less talent than selling a movie.  Anybody can aim a camera.  If you do it long enough, it will become progressively easier.

This was driven home to me when we did Blood Feast 2.  How much easier it was to shoot everything.  The film speed is much greater, so you don’t need as many lights as we used in the 1960s.  I was able to see the image on the monitor immediately for lighting and microphone mistakes.  No rushing to the lab, waiting for the film to come back and see what needed to be re-shot.  But what has become far more difficult is SELLING your picture.  Finding the audience for it.

FLORES – That is the one question film schools, festivals and the like actually avoid!

LEWIS – Selling your picture today requires a campaign.  A campaign requires a sense of 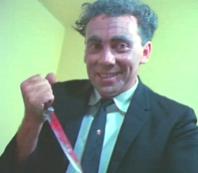 showmanship, and that is parallel to marketing.  That is what I do and what I have always done.

FLORES – The audience for the film is usually the last thing an independent filmmaker thinks of. You knew about the audience, because you ran an advertising agency at 520 North Michigan before you made any films.

LEWIS – I owned my own film equipment and was griping to a friend about life when he asked me how to make money in the film business.  Well, I realized that the only way to make money was to make features.  He asked me why I didn’t shoot features, which at the time was like a “why aren’t you rich” type question. 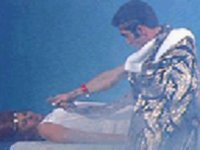 That of course started my pulse racing to shoot features.  But of what?  The breakthrough came when I realized that in order to compete with the industry, I had to make films that they wouldn’t, or couldn’t make.

FLORES – I remember as a kid my parents driving down the expressway in Atlanta past a drive-in playing the movie.  Not only was the theater packed, but there were cars lined up

on the side of the road with people standing around stunned.  Most people have only seen your films on video.  The impact on the big screen was beyond words.

LEWIS – The trick after Blood Feast was, what would I do next?  I hadn’t meant to be a pioneer.  I was just trying to do something different from the mainstream.  Michael, it was years later that I began reading people saying I had initiated a new genre of film.  I never thought in those terms.  I was marketing.  Just trying to get the films shown in theaters. The challenge was very different than today.  There was no DVD.  No video.  No cable to sell the film to.  If you didn’t make it in the theaters, you were done.  The technique of startling the theater owners and audience was marketing.  Salesmanship.

FLORES – Now, years later, you have gone back to do a sequel to Blood Feast.  How did this project come about?

LEWIS – At least a half-dozen times a year for the last several years, I have been approached by people who wanted to do Blood Feast 2. I developed a standard answer: Get your deal together and call me.  That effectively dismissed them.

Well, one fellow actually put a deal together and called me!  I opened my mail one day and here was a professionally written script!  My scripts were often written the day before we shot!  His name is Jackie Morgan and he is from New Orleans.  He called and asked what I thought of the script.  I said the industry embraced gore today and we needed something else.  Very dark, black humor injected in to stand out today.

Well, Michael, he surprised me again.  He sent me a 120-page script with my ideas incorporated.  He then came to visit me with the writer, Boyd Cord, and we hammered out a deal.  And suddenly I was directing again!  After all these years.

FLORES – How was it directing today, as compared to the hippie era?

LEWIS – In those days I loaded the camera, hung the lights, directed the actors, made sure the gore worked, and wrote the script day by day.  Here was a script, a crew of 30 people.  Some of them doing jobs I still have no idea what.  I was the director.  I became a director sitting in a chair watching a monitor concentrating on directing – actors, not friends of friends.  I had a wonderful time.  The vast majority of the crew wasn’t even born when Blood Feast came out!

FLORES – Any other film projects in the pipeline?

LEWIS – Tim Sullivan is doing 2001 Maniacs.  I have nothing to do with that movie, I’m listed as an Executive Producer.  I am not involved in the production.

There are some young people in Florida shooting a digital film called Hunting For Herschell about horror film fans trying to run a script by me.  There is another group talking to me about Herschell Gordon Lewis‘ Grim Fairy Tales. One thing that has not changed is that the gap between conversation and production on big or small films is considerable.

LEWIS – That is the one factor that has remained the same.  So we’ll see.

FLORES –  How are you doing gore effects in Blood Feast 2?

FLORES – Savini is like a god in the special effects business.  Dawn Of The Dead is still one terrific ride.

LEWIS – I think fans will be pleased.

FLORES – I think it is amazing that you did what ad execs spent 35 years in Chicago trying to do — make a feature.  And all these years later, people want to work with you.

LEWIS – I said at the start of this conversation that if you live long enough you become legitimate.  Look at all the big budget, critically acclaimed movies that came out when Blood Feast did.  Movies with multi-million dollar budgets.  Real actors.  Real crews. Now over 30 years later, punch Blood Feast into any search engine.  You won’t believe the number of websites, reviews and discussions going on!

LEWIS – Blood Feast 2 is a direct descendant of the first film.  The heavy is Fuad Ramsey’s grandson, who has returned to re-open his grandfather’s store.  The statue of Ishtar that infected his grandfather infects him.

FLORES – So here you are in your second lifetime as a director.

LEWIS – Mike, here’s the problem.  Directing is like catching malaria.  You think you have it out of your system and then it comes back and grabs you again.  I had the time of my life directing Blood Feast 2.  I truly had a wonderful time.  The other aspect is that I was treated like a director by the crew!  Rather, like a well-known film director!  That was funny to me!  I wasn’t just a figurehead.  Life is good and I am thrilled to still be around.  I have heard of your plays, seen the website, now tell me about you.

FLORES – I did a play that ran over 40 weeks in Chicago, an unauthorized story based on Bettie Page called Bettie Page Uncensored, which I’m making into a film with Greg Silva and Sarah Masters.  She is one of the most powerful actresses I have ever met in my life, so I think this film will launch her career.  She looks like Bettie, but she has a one-two punch.  She can act as well as the best actresses working in the business today.  I truly believe she is headed for greatness.  So the play is becoming a movie.  I’m directing.  The website allows people to follow the progress on the movie.

FLORES – My shows in the last five years ran anywhere from 30 weeks to a year and a half, so I understand marketing.  We also collect e-mail addresses from folks who want to pre-order the DVD.

LEWIS – That is so encouraging.  My new book is called Effective E-Mail Marketing.  This is a new field and the point of this is to keep my feet in the marketplace.  The Bettie Page movie done by a fan.  Great hook.  There is such a potential for marketing there. Bettie Page I remember from my childhood.  Irving Klaw used to sell her photos, right?

LEWIS – Are you and Miss Masters going to be at Flashback Weekend?

FLORES – I will be. I’m trying to co-ordinate an appearance by her as well.  I think Saturday night after the screenings I’ll host a party in my suite.

LEWIS – I’ll be there!  Stick to it, Michael.  Blend the new technologies with marketing. Just from doing the plays you are one of the great talents.  Stick with it.  Push the envelope.  Ignore critics.  Keep looking for actors willing to take risks. I believe it is going to happen for you, and that is going to encourage everyone in this business.  Major and independent alike.  Do it, Mike.  It’s your turn now.