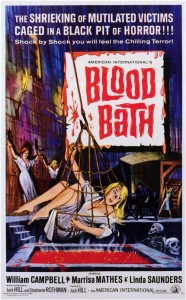 If you’re a reader of Video Watchdog magazine (and if not you should be), you may recall one of their defining articles was editor Tim Lucas’ 3-part article “Operation Titian”, which traced the evolution of multiple versions of a film produced by Roger Corman. A newly edited and expanded version of that article is included on Arrow Video’s new 2-disc release of Blood Bath, plus a lot more. This release also includes three other versions of the film, Portrait in Terror, Track of the Vampire, and Operation Titian.

For full details and to order follow this link.