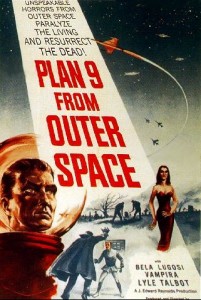 We are proud to represent the Psychotronic Film Society (original Chicago chapter) at the annual B-fest 24-hour schlockarama again this year.

Go to www.b-fest.com for more details.

We have the latest line-up right here under the break:

Robot Jox – This 1989 low budget sci-fi romp is like a combination of Real Steel, Pacific Rim and The Hunger Games. Directed by Stuart Gordon (Re-Animator).

The Amazing Colossal Man – 1957 AIP classic, and one of the (un-credited) inspirations for Marvel’s Hulk.

Wizard of Speed and Time – I’m assuming that this is the 1979 Mike Jittlov short, which is always a part of B-fest, and not the 1988 feature version. But one can hope.

Plan 9 From Outer Space – The Ed Wood psychotronic classic that has propped up the middle of almost every B-fest.

Thomasine & Bushrod – The obscure blaxploitation version of Bonnie and Clyde.

War of the Planets – There are four sci-fi epics that have been released with this title. Which one is it? I’m hoping it’s the 1966 Italian one with Tony Russel.

Super Mario Bros. – Candidate for the worst video game adaptation of all time.

Code of the Secret Service – A young Ronald Reagan stars as a G-man trailing counterfeiters in this 1939 b-movie.

Doctor Goldfoot and the Bikini Machine – Italian camp mess stars Vincent Price as a mad scientist who invents a machine that makes synthetic swimsuit models in a plot to take over the world. Okay, that just might work.

Deadly Mantis – A prehistoric preying mantis thaws from polar ice and goes on a rampage. Did I forget to mention it’s the size of a B-1 bomber?

Drunken Tai Chi – Yuen Woo-ping, director of the original hit Drunken Master (1978), returns to direct Donnie Yen one of its many knock-offs.

Yor the Hunter from the Future – Director Antonio Margheriti (War of the Planets) tried to revive the muscleman genre in the 1983 Italian peplum, with spectacularly awful results