From a Shout to a Scream 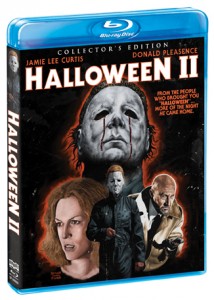 Psychotronic films have been well served by the Shout! Factory DVD label, from their respectful treatment of their Roger Corman titles to their Mystery Science Theater 3000 box sets. Today the label announced a new specialty offshoot called Scream Factory, under which they will be releasing a series of horror titles they’ve acquired the rights to. From their press release:

“Debuting this September, SCREAM FACTORY™ boasts a scary slate of fan-favorite thrillers from the 1980s, many of which have never been available on Blu-ray™ before. Titles include Halloween II and TERROR TRAIN, (both starring “Scream Queen” Jamie Lee Curtis); the 30th Anniversary release of Halloween III: Season of the Witch; They Live from director John Carpenter (The Thing); Peter Benchley’s THE ISLAND starring Michael Caine, The Funhouse from director Tobe Hooper (Poltergeist); the nightmarish Phantasm II; and the much-anticipated DVD debuts of DEADLY BLESSING, directed by Wes Craven (Scream) and featuring Sharon Stone in an early role, and DEATH VALLEY starring Peter Billingsley (A Christmas Story). Each title will be presented in anamorphic widescreen, and most will be released in a “Collector’s Edition” packed with new bonus content, archival materials, a collectible cover featuring newly rendered retro-style artwork, a reversible wrap with original theatrical key art and more!

“On September 18, 2012, fans will rejoice as Shout! Factory unleashes Halloween II Collector’s Edition and Halloween III: Season of the Witch 30th Anniversary Special Collector’s Edition on Blu-ray and DVD. These two formidable titles inaugurate the SCREAM FACTORY™ home entertainment series and are now available to preorder at ShoutFactory.com and Amazon.com.”

Though titles announced so far are not quite  classics – being for the most part lesser works by major talents and sequels – they are beloved by some fans and the special editions should make for interesting viewing. Rabid fans of the Halloween series should note that the first 500 units of each sold via the Shout! Factory website come with exclusive bonus items.