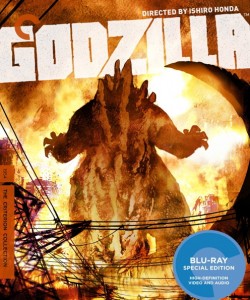 While working this morning I’m eating some sushi and watching the Criterion Blu-ray disc of Ishiro Honda’s original GODZILLA. Picture and soundtrack of this restoration are far better than the one released to US theaters and on DVD by Classic Media a few years back (also now available on Blu-ray). That restoration was a big disappointment – every shot looked and sounded like it was raining on the set.

Criterion’s disc features a meticulous digital polish on every frame of both the Japanese original and the US revision. I’ve seen this movie maybe 50 times and I’m seeing stuff I’ve never been able to before, from the impact of tank shells on the monster to the squeals of caged birds as the beast prowls by. The only exceptions are in stock footage where it seems they chose to retain the original dirt and scratches.

Also included: commentraks on both films by David Kalat, interviews with cast and crew members, featurettes and trailers. Even if you’ve already purchased this film on home video before, this edition is worth the upgrade.

This entry was posted in Uncategorized. Bookmark the permalink.