Awakening of the Beast DVD 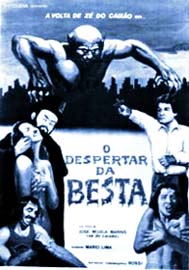 Banned for more than 30 years!

Despite extreme difficulties with the Brazilian censor boards (both nationally and in local municipalities), José Mojica Marins managed to get his horror films into theaters. Once there, they became a sensation across the country, breaking all box office records while sparking a huge amount of public and journalistic controversy. His fame spread to television, radio and comic-books. One night, Marins appeared on a television program where arrogant media pundits grilled a celebrity each week, in the end handing down a final “judgement” of the guest.

Though Marins was “acquitted” by the panel, the experience troubled the filmmaker. It became clear to him that, in the public mind, he had become inseparable with his Zé do Caixao (Coffin Joe) character – the attitudes of the evil and sadistic horror character had become confused with his own, especially after sensational stories appeared in the press about how he tested the wills of potential cast members by giving them a taste of the rigors they would have to endure onscreen.

He had also hoped to make a film about the growing drug problem of the late 1960s. Even before he made At Midnight I’ll Take Your Soul (the first Coffin Joe film), he’d been planning to make a film about juvenile delinquents, but couldn’t find the right angle on the subject. The fact that much of society’s ills were being blamed on pop culture figures like Coffin Joe and the Beatles angered him, and inspired one of his most creative and controversial movies.

Made under the title Ritual of the Maniacs, Awakening of the Beast begins with Marins usual spook show introductions, with Coffin Joe making a speech about how his world is full of strange people, but (pointing an accusing claw) no stranger than the viewer. The credits play out over a montage of cartoon pages from the Zé comics – but there’s something quite unexpected added. The sequence is intercut with shots of a young woman preparing and injecting (in grisly close-up) some type of drug. A sketch follows the woman, showing a group of perverts paying her for a performance far outside the bounds of usual tastes.

A jump cut reveals that what we have been watching is a story related by a psychologist, part of one of his patient’s case history. In the darkened room, other psychologists – and Marins – continue the discussion, with each of the doctors offering their own increasingly twisted accounts – some amusing, others deeply disturbing.

Finally, the point of the discussion comes out, as well as the explanation of Marins in the group. One of the doctors presents an account of an experiment he conducted while preparing a book on the effects of LSD. His plan was to test the effect of a variety of evocative environments on four drug addicts – a wild night club, an avante garde theater performance, and a screening of Marins’ This Night I’ll Possess Your Corpse. When it’s agreed that the film had the greatest impression on the subjects, the doctor gives each of them an injection and leaves them alone with a Coffin Joe poster.

Illustrating the impressions of the subjects, Marins changes the film stock from black & white to brilliant color. Each subject encounters Coffin Joe in his hellish world, either acting as witness and partner in his bizarre rites, or else becoming the victim of them. The four are left with widely divergent opinions of the nightmare man. This is followed by the revelation of a succession of illusions, finally topped when the smiling Marins breaks the fourth wall, ending the film.

Though Marins had trouble with reactions to the blasphemous and violent material contained in his previous movies, this film – with its attacks on society’s attitudes toward drugs and crime, as well as the government’s policies – caused Awakening of the Beast to be banned outright. To this day it has yet to be shown in Brazil, despite the fact that many critics and Marins’ fellow filmmakers love the film. Marins adopts a frantic, disorienting editing style, making it seem like a documentary intercut with Russ Meyer and Doris Wishman footage. His over-the-top sound mix is even more crazed than usual, and director of photography Giorgio Attili makes the most of the often mismatched film stocks.

Fantoma has done another great job with this release. Like their other releases in the Coffin Joe series, this one features a new digital transfer direct from the 35mm negative – which has picked up its share of scratches and speckles over the years, but nevertheless looks much cleaner and brighter than Something Weird Video’s tape release. There’s another segment of interview footage with Marins in which he reveals several new facts about the film, including how a police raid on his location led to the cops helping him make the film much more authentic. Also included on the disc are trailers for all three Fantoma Coffin Joe films, which differ from those seen on tape.

But the feature that makes the extra expense of the disc really worthwhile is the inclusion of a translated reproduction of a vintage Strange World of Coffin Joe comic-book. This one happens to be one of the very issues featured in the film. Hopefully, Fantoma will continue to present more films in the Coffin Joe series.