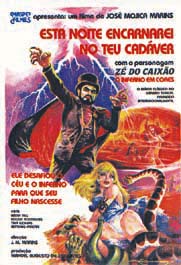 Coffin Joe appears yet again from his own private twilight zone to present another tale of sadism, immorality, and twisted philosophy! After struggling for quite some time with censor boards and religious groups, a brave theater owner finally decided to show At Midnight I’ll Take Your Soul, José Mojica Marins’ first horror film. One territory at a time, it conquered the box office across Brazil (though it may still be banned in some areas). Marins found little trouble finding investors willing to finance this sequel, which is bigger, bolder, and even more bizarre, with much more action and a wider scope.

A title card explains that This Night I’ll Possess Your Corpse picks up directly after its predecessor, replaying a bit of the final scene with one notable exception – a line of dialogue read over a shot of the disfigured Coffin Joe saying, “He’s still alive!” Yes, not only has the wicked undertaker survived his (real or imagined) attack by ghosts in the
graveyard, but the court is forced to acquit him of all crimes due to lack of evidence (here we learn his real name “Josephel Zanatas” for the first time).

After a bit of surgery, a laughing Zé do Caixao is ready to terrorize his “inferiors” yet again. Citizens flee in terror as the blasphemous man with the Evil Eye returns to his small
village. But now, with a larger budget, Coffin Joe’s funeral home has been expanded into a creepy villa by the swamp, complete with sliding panels, a mad laboratory, and a hunchback assistant named Bruno (Nivaldo de Lima). His philosophy hasn’t changed, however – he’s still an avowed, immoral atheist, professing to reject all emotion and value only the “immortality of blood”.

In a quest to father a perfect child – the beginning of a superior race – Joe abducts half a dozen potentially worthy females from the area who may meet his requirements as a mate. “Tested” by exposure to herds of spiders and snakes, all but one succumb to venomous attacks – all save Marcia (Nadia Freitas), who is nevertheless found wanting when she reveals her love for her captor. Laura (Tina Wohlers), daughter of a local leader, returns home from school in the big city and immediately catches Coffin Joe’s eye. Passing every test, she becomes his willing mate and is soon pregnant. However, when Joe learns that one of his victims was pregnant herself, guilt over killing an innocent causes him to have
a horrible nightmare in which a spindly black incubus (Palito) drags him screaming down to Hell. This surreal sequence, filmed in vivid color recalling the films of Mario Bava, is very weird indeed.

Joe manages to overcome his guilt and protect his unborn son at all costs, especially when confronted with a mob of angry villagers bent on bringing down the arrogant fiend. Dispatching attackers here and there in a variety of bloody ways, Joe is finally cornered in the swamp, still shouting out his disbelief in God. However, apparently to get the film released (and not destroyed outright) by the powerful church censors, Marins added a last-minute voiceover in which Coffin Joe repents.

Fantoma Films’ second entry in their Coffin Joe DVD series looks and sounds even better than the first. Featuring a new digital transfer direct from the 35mm negative, the original elements seem to be in much better shape, with the exception of a few prominent splices. Like the others, the film is presented in Portuguese and has been given removable English subtitles.

There’s a segment of interview footage with Marins where interesting “making of” information is revealed (like how the director dislikes using professionals in certain sequences because their reactions tend to be predictable, how most of the film was shot in an abandoned synagogue, and how he used popcorn as “snow” in the Hell sequence). Also included on the disc are trailers for all three Fantoma Coffin Joe films, which differ from those seen on tape.

This disc also includes a translated reproduction of a vintage Strange World of Coffin Joe comic book. Marins’ biographer, Andre Barcinski, provides a brief on the film’s production on an insert. Hopefully, if Fantoma continues to present more films in the Coffin Joe series on DVD, they’ll also include more information on his TV, radio and publishing projects.