A monster for our time 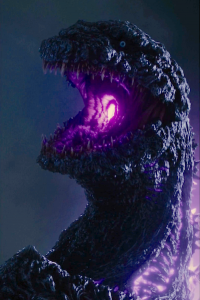 The worldwide success of the American-made Godzilla (2014), Japan’s Toho Studios to respond with yet another Godzilla film of their own. The result is one of the most unique films ever made, both a remake of the 1954 original and refreshingly new take that defies genre classification.

The film adheres to the basic formula of a gigantic creature from the sea spawned by radiation wading ashore to destroy Tokyo, but from there veers into several new directions. The most prominent mission of the film is to satirically illustrate the fragility of modern society, and specifically Japanese society. Japan has suffered a series of natural and manmade disasters in recent years, and the government has faced harsh criticism for its shortcomings in reacting to each crisis. The appearance of the threat – significantly first appearing as a Kubrickean shower of blood flooding an undersea tunnel – is met with a hilarious flurry of inaction, with the prime minister (the legendary Ren Osugi) and cabinet scurrying from on meeting room to another to wrestler with civic, economic, legal and political issues raised by the unprecedented event.

Directors Hideaki Anno (of the anime Evangelion)  and Shinji Higuchi (who plucked his lead actors from his hit Attack on Titan) deftly skewer the system with biting sarcasm, even testing the the audience with (perhaps intentional) dull stretches to make their point. After a largely comic first act, a gradual turn is made into drama, as the survivors use hard work, ingenuity, technical prowess, team spirit and even origami(!) in their efforts to save mankind.

The emerging heroes are led by bureaucrat Rando Yaguchi (Hiroki Hasegawa) and American diplomat Kayoko Ann Patterson (Satomi Ishihara), both of whom stand to benefit politically from defeating the monster. As Yaguchi leads a team of scientists trying to develop an effective weapon, Patterson pulls international strings to delay a U.S./NATO nuclear attack. A shocking subtext to the action comes with the suspicion that Godzilla may have been created intentionally, not as a cliched military project, but as a test for the human race.

As for Godzilla himself? The Toho team manages to reimagine the creature while keeping him recognizable. Here, Godzilla is not a grumpy kaiju antihero fighting alien invaders, but a self-evolving nuclear nightmare. Though the monster crawls ashore looking like a huge, rampaging dragon, he eventually stands upright and displays devastating power, a towering horror impervious to any attack. There is a fleeting glimpse of a cult springing up to worship the beast. Also, there’s the shocking suggestion that Godzilla may look like a man in a suit because he’s evolving in man’s own image. However, though this iteration of the beast is effective in inspiring terror, he lacks personality. This may be a necessity in creating the tallest, most imposing Godzilla ever, but it causes a twinge for fans with a soft spot for the monster.

Shin Godzilla works despite a near absence of melodrama. It fascinates more than it compels, rich in the detail of how a nation works (and fails to work) while neglecting its characters’ home life and recreations. As such, it brilliantly reflects society’s ills and strengths, showing us how our foibles can breed all-consuming monsters.