Only the monster she made could satisfy her strange desires!

One need only view the trailer to see why Lady Frankenstein jumps to the top of monster fans’ “guilty pleasures” lists. Rarely are so many strange and eccentric elements contained in one picture. To start off you’ve got Joseph Cotten, who went from starring in pictures for Orson Welles to starring in this one as Baron Frankenstein for (unrelated) Mel Welles. This Welles was better known as a character actor, most
notably for playing the grumpy flower shop owner Gravis Mushnik in Roger Corman’s Little Shop of Horrors – what was he doing producing and directing an Italian horror film? Then you’ve got the title character, pl 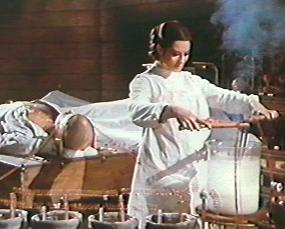 ayed by the beautiful Sara Bay, better known now as Rosalba Neri, sexy Italian actress from dozens of Spaghetti Westerns and Hercules pictures. By 1971, the trend toward more blatant sexuality in films had spread to the horror genre, and Ms. Neri promised to take things as far as they could go. And finally, you’ve got not one, but TWO of the best super-powered monsters that 19th century science could provide. The trailer promises all this, plus brain surgery, impalement, perversion and other assorted mayhem. What drive-in movie fan could resist?

The great veteran Cotton gives a fine performance as the Baron, having learned from Vincent Price in The Abominable Dr. Phibes that it’s best to play these things straight, no matter how ludicrous the script. The film begins in familiar territory, but grows increasingly twisted with every scene. The Baron has hired a pack of grave robbers led by the seedy Lynch (Herbert Fux from Mark of the Devil) to provide him with fresh corpses for his experiments. His daughter Tania arrives home, having completed her own medical studies, but the Baron resists the willful young woman’s attempts to share in his work – although she soon proves herself a chip off the old butcher’s block. Despite the warnings of his assistant Charles Marshall (Jess Franco regular Paul Muller), Frankenstein completes his monster using a damaged brain of a convicted killer. Despite taking a disfiguring lightning bolt in the face while charging up, the creature lives – but boy is he pissed! He wastes little time croaking the doctor who made him what he is, then stalks off on a rampage across the countryside, murdering whoever gets in his way while hunting down anyone connected with his execution.

Obsessed, Tania comes up with a brilliantly stupid plan. By transplanting Marshall’s brain into their half-wit handyman Tommy, she’ll create a fresh new monster to get revenge on the first one. Naturally, she seduces Marshall to insure his cooperation. By now, the police – in the form of Captain Harris (famed muscleman Mickey Hargitay in one of the few films that doesn’t require him to take off his shirt) – are suspicious of the strange events up at the castle. Just to make things harder to explain later, Tania and Charles are quickly married offscreen. Then, instead of merely slipping Tommy a knock-out drug, she decides she needs to seduce him, too – so Charles can sneak up behind the poor brute and smother him with a pillow! To make the scene unforgettable, she has an orgasm while Tommy dies.

Kinky, but effective. The operation is a success and now Charles/Tommy is smart and strong enough to take on the gruesome monster – who just happens to be on his way back to the castle.

This “30th Anniversary Special Edition” of Lady Frankenstein is presented as the first release by DVD Drive-In, and they’ve done a fine job. In a half hour interview section, producer/director Welles confirms this as the “official” video release, while giving a complete rundown of how the film came to be, with plenty of interesting tales and tidbits thrown in. He also refers to the print used for the transfer as “pristine”, but that point is debatable. The print begins with a big, bumpy splice, and has a generally grainy and slightly speckled look to it through most of the running time. When compared with Madacy’s “Killer Creature Double Feature” full screen edition of the title, DVD Drive-In’s widescreen version shows quite a bit more picture on each side, but cuts off a bit at the bottom of the frame. The colors on Madacy’s are just as sharp and vivid, but the picture looks a bit too bright, with some light bleeding in at the edges occasionally. Welles also claims this is the only uncut release of the U.S. version (the version shown in Europe is said to be slightly longer). Madacy’s clocks in at only 12 seconds shorter, but some other video releases of this common title are taken from much cut TV prints.

For fans of the title, this special edition is clearly the one to own. Aside from the enlightening talk with Welles, there are a number of other extras thrown in. Neri is briefly interviewed as well, and looks a good twenty years younger than her reported 61. She explains that she chose to use the name Sara Bay herself, but seems surprised to find out that she was billed with that name in America. The disc includes a gallery of sexy pin-up shots of the actress, plus another with photos and ad art from the film. There are bios printed in tiny type of all the principles, and a TV spot. As a bonus, TV spots for Beyond the Darkness, Beyond the Door, The Night Child, Legend of the Wolf Woman, the Orgy of the Living Dead triple bill, and The Night Evelyn Came Out of the Grave are also included.

That wonderful trailer for Lady Frankenstein (looking much worse than the film itself) is here, too, followed by some unexplained, odd looking clips from the film with the DVD Drive-In logo on them. Hope you love the trailer’s bombastic voice-over – it plays over most of the menus until you’re kind of sick of it.