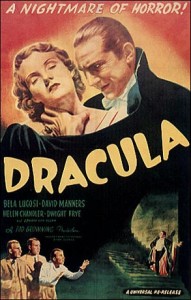 Universal got into the DVD arena last fall in a big way by restoring and releasing deluxe presentations of their classic monster movies, and this one is the best of the lot so far. This is also the best looking Dracula ever on video. I’ve seen the film dozens of times, and there is footage in this restoration I’ve never seen before. Also, the sound and picture show a depth of detail that almost turns it into a whole new experience (though there’s still a few speckles and a large pop during the opening theme).

And speaking of music, this release received extra attention thanks to an entirely new alternate soundtrack composed by Phillip Glass and performed by the Kronos Quartet. Don’t buy the hype — the strings are a bit too insistent, making the new music intrusive and not really worthwhile.

The real bonus on the disk is the unexpected inclusion of the famous long-lost Spanish version of the feature. Shot concurrently with Tod Browning’s English version, the Spanish Dracula, directed by George Melford, doesn’t have the cast presence of Lugosi et al, but sticks closer to the shooting script, and is the more technically accomplished and sexier of the pair.

I’m a big fan of commentary tracks, and this one is terrific. Universal wisely chose David J. Skal, perhaps the foremost Dracula authority, to provide the track and also direct a supplemental documentary. Both are highly engaging and informative, unlike their earlier DVD of The Mummy which got stuck in a boring play-by-play of the film. Both this disk and Skal’s books on the subject are highly recommended.